Some time ago I was asked, if N1MM+ can manage "contestfree" areas - especially for the WAG contest to  alert the user not to use such frequencies. Other contestprogram can warn if you enter "forbidden" areas :)

Well - N1MM+ can´t do this and they do not want to include such a feature.

I pass some ideas to the WAG manager and started to create a small tool for this purpose (as I just started to learn python).

1. Buddy alert - based on a text file it analyse the udp traffic from N1MM+ for the included calls and if one of the calls is spotted it show it up in a smal window.

2. ON/OFF counter - for some contester it is useful to see the times how long they take part in a contest - it can be seen in N1MM+ too but I thought it is more effective to do it  in this way as the toolbox show it.

3. Timer to show the time until a contest starts - it may make fun to see in really big letters how long you have time to start the contest

Help document not updated until today

NEW: click on buddy and N1MM will switch to the QRG

You can edit ini Files and txt files from inside of n1mm_toolbox.

Maybe DXkeeper Gateway is broken (it should work but ...)

Some new ideas are on the road - but what you may need?

- new creation of the EXE file - it reduces the number of files dramatically (only one + set.ini)

- n1mm_toolbox will start now with buddies.txt for quick start - but you can change it during the program runs 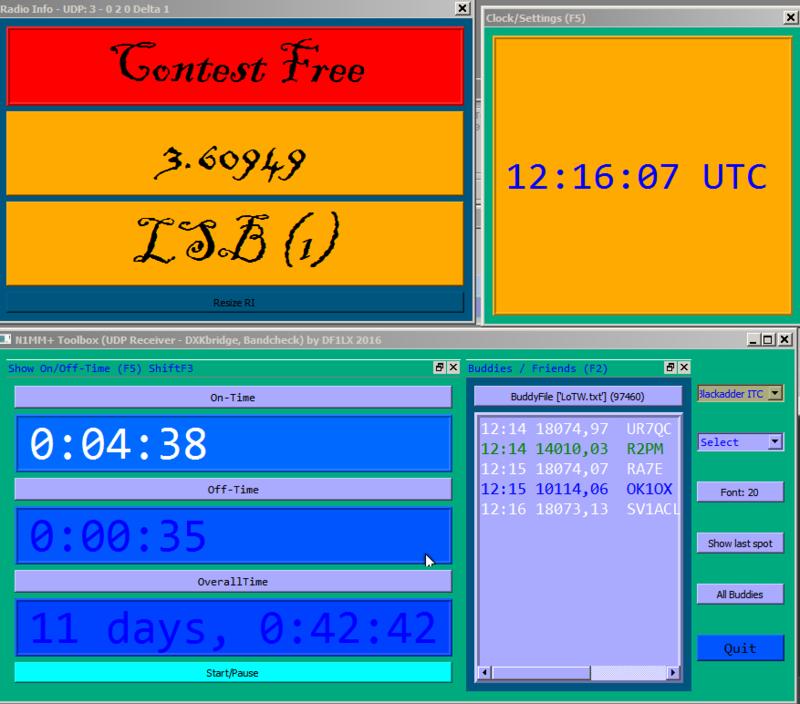 Please give feedback - it seems it is in use but no problem is reported until today :)

New feature request are welcome - or someone want to make own changes - the sourcecode is not on GitHub or ... But if someone want - no problem (I may include a small DX cluster like in my logging SW hostilog - but my main contest program is N1MM+ only)

For the new created VOTA award from the WRTC2018 team I only created a small txt file with known VOTA member - and today (14.01.2018) it works fine in the VOTA activity on 80m have a look to the screenshot:

- Lines with (text) mean, that I have already worked the VOTA member like seen DL3KWF and DG1CMZ. They can be hidden pressing on the "ALL Buddies" button.

This page has been viewed: